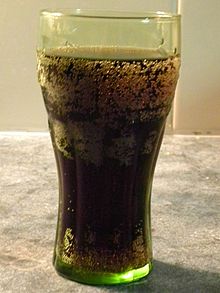 (The image "Glass of cola" via wikipedia)

Sugar sweetened beverages (SSB) contribute to the prevalence of obesity among American teens, says the Centers for Disease Control and Prevention in their 17 June 2011 Morbidity and Mortality weekly report. According to the agency, sugary drinks, although popular with teens, contribute to obesity because the beverages contain a lot of calories but lack nutritional value.

The CDC analyzed data from 11,429 students that was collected via the 2010 National Youth Physical Activity and Nutrition Study (NYPANS) which included a survey of students (grades 9 - 12) that measured physical activity and dietary behavior to determine the extent to which American teens drink a variety of beverages. The NYPANS used cross-sectional data representative of public and private school students (grades nine through twelve) for every state and the District of Columbia.

Obesity among the youth is increasing at an alarming rate. Statistics from the National Health and Nutrition Examination Survey (NHANES) report that 12.5 million youth (aged 2 - 19) are obese. That number is going to continue climbing unless adults and children take greater steps to eat healthy foods and increase their weekly level of physical exercise. Although cost of purchase tends to influence the way adults choose the foods that they consume (for more on this topic read my articles "Thinning Wallets and Bulging Waistlines", and "Why Is America Getting Fatter?"), children and teens often eat sugary foods because they taste good.

To a certain extent this is the result of television and magazine advertisements that appeal to the interests of young people i.e. that consuming sugar based products is fun. The problem with this is that when people take in more calories than their body can use, they'll inevitably gain weight and become at risk for diabetes and other ailments (read my article "Diabetes Hits America Hard: CDC Reports That Diabetes Is On The Rise").

In the CDC's report on beverage consumption among American adolescents, goverment health experts suggest that "families, schools and youth-oriented institutions should limit SSBs among all adolescents while ensuring their access to more healthful beverages."

Interestingly, this report comes on the heels of another story which we posted about the debate surrounding chocolate milk consumption in public schools. The National Youth Physical Activity and Nutrition Survey found that milk is one of the most common beverages consumed by school children. Milk is rich in vitamins, minerals and other nutrients thus making it much healthier than fruit juice drinks, soda and other sugar laden drinks. Those facts could add considerable value to the debate in favor of including chocolate milk in the regular menu as this refreshment would be in keeping with the US government's suggestion to "ensure...access to more healthful beverages" in schools.

Schools are on the front lines in our country's ongoing battle with obesity, and as one of our regular readers pointed out in a recent comment, it comes down to choice and education. If schools and other youth-based institutions provide young people with the facts about the potential risks associated with consuming too many sugary drinks and present them with healthy, good tasting alternatives, students may consume more of them. And that would be a huge step in the right direction.

(For more information on beverage consumption by young people in the US, visit the CDC link in the article sources at the bottom of this page.)

What do you think? How would you encourage people you know to drink less soda and other sugar based beverages in favor of healthier ones? Share your thoughts in the comments.

Sign up for our newsletter to get important health and wellness news. I'm living fit, healthy and happy. Are you?

We belong to GOD.